By Cristina DC Pastor
In celebration of Filipino American History Month, The Outstanding Filipinos in America (TOFA) presents this year’s accomplished individuals with varied talents, superb achievements, and who make service to the community a meaningful part of their lives. 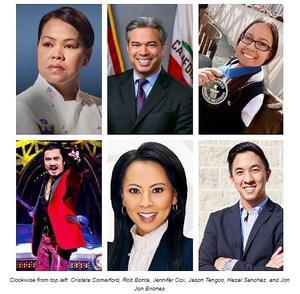 Founded by New York-based journalist Elton Lugay in December 2010, The Outstanding Filipinos in America (TOFA) Awards give recognition to organizations and individuals who have raised the profile of Filipino Americans. Serving on the TOFA board are TOFA New York co-founder Cristina DC Pastor, who is the founding editor of The FilAm and co-host at Makilala TV; property management professional Erno Hormillosa; concert promoter Vince Gesmundo; and Robert and Melissa Mendoza of Mountaintop Productions.

TOFA showcases how Filipino Americans have enriched the cultural diversity that makes America one of the greatest nations in the world. Across fields, such as theater, fashion, cuisine, activism, politics, and health care, FilAms contribute to an ever-progressive society. In a way, TOFA has served to inspire Filipinos all over the world to be the best they can, while promoting the rich heritage of the Philippines, where all the honorees originated.

The 7th Annual TOFA Awards is presented by Wells Fargo in cooperation with INQUIRER.net, and Mountaintop Productions.

Noel Fajardo, a Las Vegas-based gastroenterologist, has visited the Philippines recently to raise awareness on colon cancer and its early prevention. Fajardo, a graduate of the University of the Philippines College of Medicine in 1997, says early...

United States-based gastroenerologist Dr. Noel R. Fajardo is aiming to raise awareness of colorectal cancer so that more people will learn about that the early detection and diagnosis of this cancer that may very well save their lives. If his…

Setting goals: 4 gastroenterologists on what they want to accomplish in 2016